How Gems Are Cut

You are here: Home / How Gems Are Cut 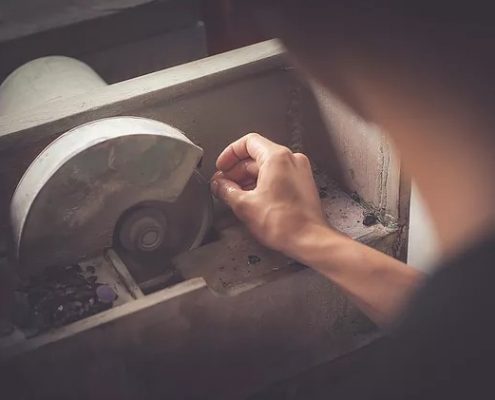 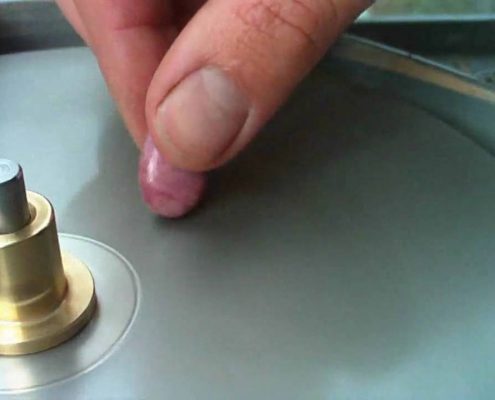 It is useful to remind ourselves about the names of the various parts of a gem as the names will be used in this document. The diagram below provides a concise list.
The upper part of the gemstone, which contains the large flat facet, known as “the table”, is called “The Crown”.

The lower portion of the stone is called the “Pavilion”, whilst the ring of facets around the perimeter, separating the crown from the pavilion is called the “Girdle”. The sharp point of the pavilion is known as
the “Culet”.
The “Star”, “Main” and “Break” facets are cut at precise, pre-determined angles inclined to the plane of the table, so that the light rays which enter the stone through both the “Table” facet and the “Star”, “Main” and “Break” facets are refracted and reflected internally from the back pavilion facets — also cut at precise angles — in such a way that as many rays as possible are focused to return and pass out through the crown of the stone adding to the sparkle and brilliance of the gem.
The thin belt of facets where crown meets pavilion is known as “the Girdle”, and these facets are invariably cut at 90 degrees to the plane of the Table.
In the perfect world, if these facet angles are correctly cut, no light rays should escape from the stone except via the table.
Could we be so lucky? “No”, but that is the challenge!
The process of cutting a gem is one of accurate grinding with successively finer abrasives until the final shape is achieved and the facets are fully polished. It is a relatively simple process. There are over 4,500 designs for gems. Each design is available as a set of cutting instructions which sets out the angles and rotations in progressive sequence. Examples of these designs and cutting instructions can be found in the Library section of this website.
The first step is to select some rough crystal material which is to be cut. In order to accurately control the positioning and orientation of the rough stone to create the facets it must first be fixed to a metal rod by means of an adhesive. and then mounted into the faceting machine.
The rod we use is called a “dop” and the adhesive is usually a wax resin mixture known as “dopping wax” though sometimes other adhesives are used such as Epoxy putties like Araldite etc.
The illustration below shows a set of dops for a Faceting machine set out neatly in a rack, whilst the illustration alongside shows a sawn piece of stone which has been fixed by wax to a dop.
The stone illustrated here attached to the dop has been given some initial grinding to start to bring it to shape. The flat surface of the stone which represents the temporary table facet is next to the dop and the girdle facets and the pavilion facets are now being roughed in.

Notice that the end of the dop stick shows a cutaway section which is a machined flat surface to ensure that if it is taken out of the machine it will be returned to its former position precisely.
Before going further, it is necessary to “prepare” the faceting machine.

By this we mean calibrating it so that a zero index position is in fact a zero position, and that the “cheater” is accurately set up. (The cheater is a mechanism that fine tunes the index position.)

In the photo (left), the assembly has been set at 45 degrees, and an accurately machined 45 deg dop has been fitted. The index is set at 0 and the angle of the arm at 45 degs, and the true flat of the angled dop adjusted and brought to correctly rest on the platten of the turntable on which the cutting lap will be placed before cutting

he assembly is raised or lowered on the mast to facilitate this.
In the photo (left) the dop has been fitted into the faceting arm (the quill) and tightened and locked into position and the rough cutting lap fitted on the platten. At the top of the quill can be seen the black
index gear, in this case a 96 index – i.e. 96 notches around the 360 degrees circumference. The cheater is the notched aluminium disc, to the left of and above the index wheel in the photo
The faceting head provides controls to ensure precision of angle and rotation. The pavilion facets will normally be cut first starting with a coarse lap to “rough in” the facets and bring the pavilion culet to a nice regular point. At this stage the final size or width of the stone will be created by grinding the girdle facets.

Next each pavilion facet is then reworked with a finer lap to remove the deep scratches made by the coarse lap. For a pre-polish, a very fine lap may then be used to try to eliminate any scratching by the previous lap and to bring all the facets to good meets. Finally each pavilion facet will then be polished with a polishing lap. Some polishing
may be done to the girdle at this stage.Next we want to cut and polish “the crown”. But the crown part of the gem is stuck to the dop. We have to get the dop off the stone and stick the stone to another dop by its pavilion. This process is called “the transfer” and requires the use of a special alignment jig which keeps the two dops absolutely in line and ensures an accurate positioning of the stone so that crown and pavilion facets will remain aligned. We need to choose a suitably sized dop with a recess into which the pavilion will fit.
Cone dops are used for pavilions which come to a pointed culet, V dops for pavilions which have a keel such
as is seen in many rectangular or oval stones. We then use hot wax or glue to glue the dop to the pavilion.

The picture to the left shows a dopped stone with completed pavilion which has been fitted into the alignment channel of the upper block of a Facetron transfer jig.
This block slides accurately up and down on the two columns. The bottom block is fixed. The cone dop to receive the pavilion is clamped into the bottom block. Dopping wax is applied to the cone dop, the dop assembly is heated and the top block is slid down so that the pavilion of the stone enters the hot wax and seats accurately in the cone dop as in the second picture to the right.
The jig is allowed to cool which fixes the stone.
Then the stone with both dops attached is removed from the jig. The original dop is then removed by heating the end of it slightly, to soften the wax, and gently working the dop clear without disturbing the newly dopped joint on the pavilion. Any excess wax is also removed from around the stone.
The transferred stone, on its new dop, is now replaced into the faceting head of the machine and the crown break facets, main facets and the star facets are then ground, in that order, then pre-polished and finally polished.
The cutting of the break facets also defines the final width of the girdle and it’s associated facets. These girdle facets, which have already been partially cut, are at 90 degs to the table. A width of 0.02 mm is generally accepted as the normal width for the girdle. Thicker than this and they tend to dominate the appearance of the finished stone, whilst less than this thickness means that there is insufficient material and strength left in the stone’s edge to allow for the claws of any future setting to which the stone may be subjected.
After the crown breaks, mains and star facets have been polished it is usual to then polish the girdle facets which were cut when the stone diameter was determined, immediately after cutting the pavilion main facets.

The final step in our project is to cut and polish the table, and this requires removing the dop from the quill, fitting the 45 deg dop holder (used when we calibrated the machine before cutting) and re-inserting the dop in this such that the dop will be vertical to the lap when the stone engages the lap, thus cutting a true table facet which is parallel to the girdle.
Once cut, the table is polished and the stone removed from the dop by gentle heating to soften the wax, then lovingly cleaned and washed in a soft soap detergent, rinsed and dried and then admired with true pride by the cutter — and hopefully by the lady to whom it will invariably pass!

Cutting is fun and very rewarding!